The following post was written by Anne, coordinator for CETFA’s investigations and rescue team, Western region. 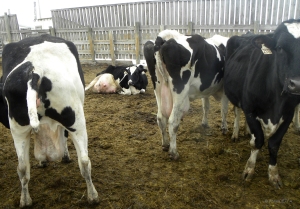 Claire was spotted hidden away in the back of a livestock auction, forced to lie in excrement and mud. Although she was in great pain and could not get up, the auction had accepted her and planned to ship her to a major slaughterhouse two days later. Unable to move and follow workers’ orders, Claire would be kicked or beaten with an electric prod onto a transport truck, pulled, pushed or dragged aboard the truck, and likely trampled by other cows on the way to the slaughterhouse.

A CETFA volunteer inspector present at the auction brought water to Claire, who drank without hesitation: not able to stand, she could not reach the water trough. The inspector advocated at length for Claire’s well-being, finally convincing the auction house to do what they were legally required to do – euthanize Claire to bring an end to her suffering. Claire’s suffering ended because there was someone there that day to be a voice for her. 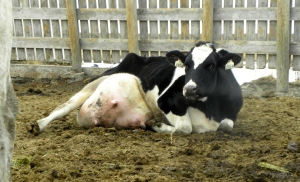 Sadly, this event is not an isolated incident. From our experience, the dairy industry produces the highest rate of downer animals in Canada (animals too sick, diseased or injured to stand).  A federal government study showed “spent” dairy cows are in transit from farm of origin to slaughterhouse for an average of 3 weeks.  During this time they are often taken from auction to auction and will pass through the hands of many buyers until they get the highest price they can squeeze out of them. At each auction, the provision of food and water is at the discretion of auction workers and never guaranteed.

Dairy cows are some of the saddest animals our inspectors see at livestock auctions.

To learn more about the life of a Dairy Cow, please visit: 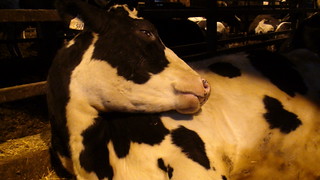