Chicken.  Just the simple word conjures up different images for different people.  For most people, myself included until recently, it simply meant food.  Fried chicken, fried eggs, chicken burgers, free range!  We are inundated on a daily basis with TV ads of tasty chicken in all its many forms.

But then last year, after much thought and research, I decided to get myself a few hens, as my little acreage just didn’t feel complete without some kind of barnyard animal in it, and chickens struck images in my mind of idyllic farm settings with hens roosting on fence posts.

I would not say that I rescued my six hens.  But as it turned out it was a relief effort of sorts, given the circumstances I removed them from.    I simply answered an ad from an elderly woman claiming she was moving to a new home and needed to get rid of her flock.  And so my journey began, for upon arrival to what I was anticipating would be one of those lovely country scenes with chickens free ranging in the driveway, I instead discovered an industrial scale barn, and my six new chickens crammed in small plastic crates out in the driveway under the full heat of the summer sun.

As we got out of the pick up the stench coming from the barn was overwhelming, and at that moment I had the urge to get back in the truck and drive away, because I did not want to be part of supporting an industry of cruelty and neglect.  But then I saw the hens, panting in the crates, stuffed so tight they couldn’t even stand up, and I gave in.  I could not send them back to the barn.

So we transferred them to the truck and off we went.  Once home and released into the coop we had prepared, it didn’t take long to realize that these chickens had never known human kindness, and had never seen the world outside their barren barn.  They huddled in the coop and would avoid our touch.  They didn’t even want to consider stepping through the door and out into the run we had made, which was full of daisies, grass, and lilac bushes for their enjoyment.

I was not completely naive, I knew what factory farms were, and that is what these hens had endured.  The tips of their beaks had been cut off to make them blunt, one was improperly cut with her top beak being shorter than the bottom, so she couldn’t peck seeds off the floor. And one was missing the end of her toe. Their combs were pale, and their eggs were pale and thin shelled.  I had purchased all kinds of treats that folks on the internet said they liked, but these things were foreign to them and they would not eat anything but commercial feed.

So I worried, and I researched.  Learning all I could about factory farming, not just for laying hens, but broiler chickens too, as it was something that had also concerned me for a while.  Our little valley in the southern interior of BC is full of broiler farms, and in the nearest town just 10 minutes away was home to a chicken processing plant.  I knew the history, and have seen the trucks pulling up to the barns in the middle of the night to take the chickens to the plant under cover of darkness.  And in the spring the farmers dump the accumulated chicken manure from these barns into their fields.  In the fields across from our property the manure they dumped was full of chicken carcasses, the smell was horrible, and for days there were crows, eagles, coyotes and bears, all convened on the field to pick at the bodies.  I called various levels of government, each time being passed along to another, none seeming to think that this was an issue, and nor was it breaking any kind of law.

So, what I learned was that not only is factory farming cruel and inhumane, it is also terrible for the environment and for public health.  We have a creek that passes through the center of our property, and our well is right next to the creek.  We had our water tested, and it came up with all kinds of bacteria, including coliform.  We’ve had to install a very expensive filtration and UV system just to make it safe to drink.  How can this be legal, that these farms can pollute the streams with their carcasses, and manure?  Non-farmers would not be permitted to do this, would they?  If I dumped my septic into the creek you can be sure they would be at my doorstep instantly, but when it comes to large scale farming operations, there seems to be a pass the buck mentality amongst the government agencies.

I could go on about the many factory farm horror stories, just from my own little town, but let’s get back to my hens…After a few days they finally got brave and ventured out into the run.  They began nibbling blades of grass, and began digging under the lilac bushes.  Finally they were beginning to act like normal chickens!  And I discovered the one treat they could not resist, grapes!  By the end of the week, they began to recognize me, and recognize the sound of a bag full of grapes.  They would come running to the gate to greet me, and would jump up trying to get at the bag of grapes in my hands.  I would hand feed them to get them used to me, and in no time at all had them trying all kind of new treats.  Rice, oatmeal, cantaloupe, and spinach became favorites.  I released them into the yard so they could graze and dig.  They enjoyed dust baths, and digging for bugs in the garden.  They would follow me around while I weeded flower beds, inspecting every weed I dug up to see if the roots contained a secret worm.  I was amazed at how quick their reflexes were, and their eyesight and ability to spot a worm in a handful of dirt is unbelievable.  They would sit and relax on the sundeck with me, and they would purr with contentment (yes, chickens purr) as they basked in the sun.  They would flop over on their sides and spread out their wings to feel the full heat of the sundeck floor on their bodies, and would close their eyes in complete relaxation.  All their chicken instincts and habits kicked in.  This was the life! 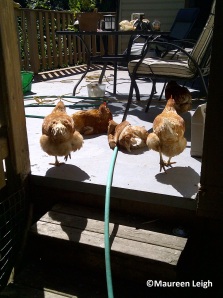 To heck with repainting the sundeck, it’s time to relax! 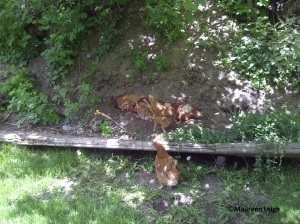 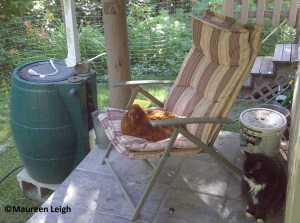 Matilda, relaxing on the porch with Annabelle the cat.

I should counter all the happiness with a bit of a disclaimer though, to be fair.  It is not all joy all the time.  Chickens are a big responsibility, like any other living thing.  They will live much longer than they will produce eggs, they poop a lot, and they will destroy your flower beds unless you pick the right kinds of plants.  They will steal your garden vegetables, and if you spoil them like I do, they will cost you much more than you could ever get back in eggs.  And there is molting.  I have yet to experience it with my “lady birds” and I will admit I am apprehensive, but we will help them through it when the time comes.  And there are predators.  We have had coyotes come right up to our fence on more than one occasion, and the dog is perpetually on alert.  We have an arsenal of firecrackers to scare them off, and while neighbors and family have recommended guns, I feel that it is we intruding on the coyotes territory, and that they are not to blame for the situation.  This is their forest, and we are the visitors.  And now that it is winter, there is the added expense of heating the coop.  I have been told is not necessary, they wear down coats after all, but when the thermometer drops below minus 10, the heat lamp comes on, and they do like to sit under it to warm themselves up, especially the older ones.

Then there are the pitfalls of getting the chickens in the first place.  It is definitely a buyer beware sort of environment, so if you want to get chickens, I would highly recommend you avoid chicks if you can.  Hatcheries ship these via mail.  Have you ever been to your local post office on chick delivery day?  It is the saddest thing I have ever hear.  Little cardboard boxes full of peeping little lives.  Sexing chickens is not an exact science, and the hatcheries will often send male chicks by mistake, so when you get your hen order you are almost always guaranteed to get at least one rooster.  Craigslist and Kijiji are full of them, the roosters nobody wanted, or couldn’t keep because they live in the suburbs. 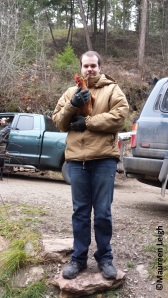 My son, this fall with “Charlotte”.

These web sites are also full of “spent” hens.  People will try to give these away in various manners, but the reality is that if they are free, they are likely past their prime.  These will often be listed under heading such as “downsizing my flock” or ” free stewing hens”.  Both have the same meaning.  Someone wants new, fresh laying hens and wants to unload the ones that don’t lay anymore, or are laying less and therefore less profitable.  If you are like me and don’t really care if you get eggs or not, then you can easily find yourself some pet hens to brighten your life and decorate your yard with.  Your family will get a kick out of them, you will get gardening companions and free fertilizer, and your kids learn empathy through caring for other living beings, and learn where those chicken burgers really came from.

For me it has been totally worth it, just to have learned more about these very entertaining, engaging and curious birds, and to get an introduction into becoming a more compassionate human being.   I am exploring things that I never would have thought about before, have stopped eating meat and dairy, and am considering going full on vegan too, something for which I’ve already been the butt of jokes at work.  But it won’t faze me.  And now I want to rescue more hens, and pigs and goats too!  Not to say that everyone will have these kind of epiphanies, but if all you and your family learn is a little more compassion for your fellow beings, and to care more about where your food comes from and the health and wellbeing of your environment and your communities, it is totally worth it don’t you think?